The pairing of Leroy Bell and Casey James, better known as Bell & James, is one of two unsung heroes of the Philadelphia soul scene. Bell’s uncle Thom Bell is a legend of Philly Soul; the duo had written many songs for the O’Jays, Teddy Pendergrass, MFSB, and others on the Philadelphia International Records roster. As what seemed to be customary in the 1970s for people who found success in the background, eventually the work of Bell & James netted them a record deal with A&M, which yielded three records, of which this was the final entry. The duo is best known for the hit that anchored their initial record with A&M, the disco/R&B hit “Livin’ It Up (Friday Night)”. Though they never quite reached those heights again, they did make some good music together, including that which is contained on this album.

One striking thing about their 1978 debut, is that “Livin’ It Up” was a bit of deceptive single; the thought, even by the album cover, was that you might have been in for an album full of disco-burners, but what you really got (perhaps, by virtue of Leroy Bell’s unique voice) was something a little more middle of the road. The same is true for In Black & White. Stylistically, this album is all over the place: disco-style R&B with rock-ish guitar (“Love, Call My Name”), ’60s-style throwback R&B (“You Got The Power”), contemporary uptempo R&B (“Is It Fire”), yacht rock (“Radiation”, “Renegade”, the very Doobie Brothers-like “Runnin’ For Your Life”), and smooth ballads (“Wind And Rain”). To add further to the “yacht rock” cred, the supporting cast assembled for these songs contains quite a few LA studio luminaries: Robbie Nevil (credited as “Little Robbie Nevil” on the inner sleeve), Neil Steubenhaus, Carlos Vega, and the late, great Jeff Porcaro (who handles drumming duties on all but two tracks; though hearing Leroy Bell on “Is It Fire” begs the question of why he didn’t do more of these tracks himself). Each song has its own flair and appeal, and though the style of the songs may not be completely congruent, the arrangement and instrumentation provided give it all a united feel. “Radiation”, in particular, inspired repeat listens, though the lyrics are about as curious as one can get, even when you read them in print. The rarest of the Bell & James trilogy, this album is a worthy listen for those who were already one foot in the door with the mention of the LA studio stars who assist.

Following Inner City Dreams comes the more pop-flavored You Don’t Know Me, from largely the same cast of players (add Paul Jackson, Jr. on guitar for a number of tracks, and also Harvey Mason on drums on one track). Hearing the instrumental selections, in particular, “Thoughts Of You”, it’s no wonder that “smooth jazz” took off as a radio format, and many musicians who were dipping their toes in that water already, were rushing to have a piece of the action. The resemblance to music that was often peddled by publishing companies for use in adverts, stage, and screen (and often shared/reviewed here) is not lost here either; Pat Coil, who contributes on this album (and has for much of Kenny Pore’s recorded work), has a storied career behind the scenes in said business as a composer. The vocal pieces, again, helmed by the Eric Tagg-like Rick Riso, are the highlights and the hardest lean toward a “pop” sound contained on this album. The most enjoyable of which, is “My Heart Knows”, which, much like “Everyone Needs Someone Like You” from the last item, was an inexplicable omission from Pore’s released anthologies.

Though, a number of the selections of Kenny Pore’s Inner City Dreams could be categorized as “jazz” (albeit, the “contemporary” or “smooth” strain that was not quite a radio format when this album was released), the vocal pieces of this record hit the midpoint of R&B, jazz, and “album-oriented” rock that is often referred to as “yacht rock”. In fact, it was the title track of this album, that immediately brought to mind such a designation. Kenny Pore, the guitarist who headlines this album, was born in Chicago to a musical family, dropped out of school to find his way in the industry, a journey that took nearly 20 years to realize with this album. For as seemingly meticulously crafted as this album sounds, it was reportedly hastily put together with the limited studio time he was allowed. This is a testament to the musicians who participated on this album (notably keyboardist Pat Coil, and a host of names anyone who is familiar with the LA studio scene of the ’80s will recognize: drummer Vinnie Colaiuta, saxophonist Brandon Fields). Rick Riso is the voice you hear on exactly half of the album’s tracks; his vocal stylings are not unlike those of Eric Tagg (a discography that will be reviewed in future installments of the Vault).

Though the title track immediately catches the ear, “Everyone Needs Someone Like You” is the other reason curious ears would seek out this album. If not for elements of this album being brought to light years down the line, it likely would have faded into obscurity, though it’s a worthy listen, if you don’t mind softer sounds engineered for a yacht ride (or with windows up and A/C on in a luxury vehicle); Pore has since taken a number of these songs, plus some others from the sessions of around the same time and anthologized them. Inexplicably, “Everyone Needs Someone Like You” was left out. 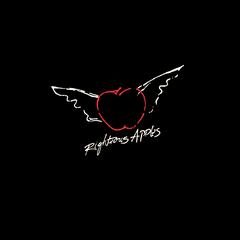 The Righteous Apples, which aired in the early ’80s on PBS (American public television) followed the actions of five young musicians in Boston, helping out people in need along the way. Though (as was typical with TV programs with a “message” of the day), the lessons imparted could be rather ham-fisted, what was undeniable was the soundtrack — high quality, disco-flavored pop of the time, with killer instrumentation. The success of the show eventually led to a (super-rare) full-length album, released in 1982, and the results do not disappoint.

Two of the selections (“Let It Go”, “I Get It From You”) were originally recorded by the group Pages, a group that may ring bells among those “in the know” (the songs’ composers, Richard Page and Steve George, were principal members of said group). Elizabeth “E.G.” Daily (credited as “Liz” on the back cover), known mostly nowadays as the voice of characters such as Tommy Pickles (Rugrats), Buttercup (Powerpuff Girls) and others, is the voice you hear on the first three tracks — and hers is a rich and powerful one indeed. At one point in the opener, “Are You There?” she hits the whistle register! The influence of composer (and underrated keyboard wizard) Greg Phillinganes is certainly felt on “Your Time To Love”, made sweeter by Daily’s dulcet tones. Cast member Kutée slides in effortlessly for the remainder of Side A, with her cool yet vivacious vocals on “I Get It From You” and “Silver City Blues”. On the former, she casts a perfect shadow and complement to Daily, proving to be just as capable, just as powerful, and just a little more mature.

On Side B, cast member Mykel T. Williamson (who is known more for his role as Bubba in Forrest Gump nowadays) handles the lead vocals, which are mostly rapping over upbeat, drawn out funky dance numbers that are hard to put down. The heavy-handedness of the TV show is certainly present in the lyrics of “Merry Go Round” (an anti-drug dance scorcher) and “Stay In School” (self-explanatory), though on the gospel-inflected “I’m Walking Happy”, a call to honor civil rights icon Dr. Martin Luther King, Jr., you get something a little different (and dare I say it, a little subversive) — while the subject of honoring King (never done better than Stevie Wonder on “Happy Birthday”) is nothing new, the tone and direction of the lyrics — indignant and speaking truth to power (the phrase “power structure” is used; “Jim Crow” is namedropped, and later on, Mykel fancies confronting a senator on his hypocrisy and racism) is not something you would find in an otherwise “squeaky clean” program aimed at the youth of the day, particularly in the ’80s. Overall, an enjoyable listen; the rarity of this LP often fetches high prices when it is found, and though one may debate whether the songs are worth the price of admission, they certainly deserve a second chance to be heard.